Posted by Hannah Brill. Hannah is a Sophomore at UVM in the Environmental Program. While walking through the Green Mount Cemetery in Centennial Woods, a symbols engraved on one of the gravestones caught her eye. She decided to dig a little deeper and found something much more interesting then expected. 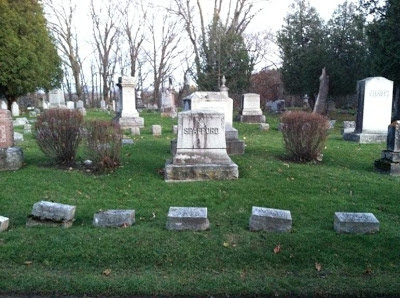 As I walked through Green Mount Cemetery here in Burlington I noticed a peculiar symbol embossed on one of the fancier gravestones, which belonged to the Spafford family.  The symbol is simple: a “G” engraved inside a compass and ruler (see image below). This natural history mystery led me to do a little research behind the peculiar symbol. 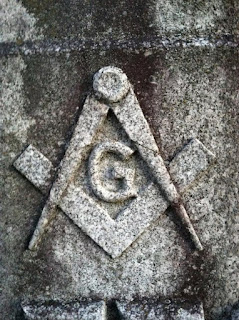 Once I began researching more about this mysterious symbol I opened a door into a much more peculiar world then I had expected. The engraved symbol belongs to the Freemasons. Freemasons are an international “secret” fraternity. It’s not very secret because so many people know about it. Five million of them walk among us, globally. They have lavish temples, ancient legends, and roots in the medieval crusades. The creation or beginning of the Freemasons is uncertain but some spectators say they can be traced back to the late 16th early 17th century during the stonemason guild of England, Scotland, and France.

The members of this society are powerful, among the elite include George Washington, Franklin Roosevelt, Harry Truman, Hennery Ford, Mozart, Napoleon Bonaparte, Metro-Goldwyn-Mayer MGM studios, Warner brothers, Fox, the man who created the UN and the CIA and many more. The Freemason society may not be that hush-hush but they do have many secrets that have created a lot of buzz and conspiracy’s surrounding this enigmatic club. 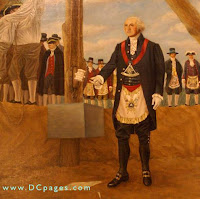 This organization has caused a lot of commotion over the years. Their secret rituals, handshakes, meetings, and lavish temples (their clubhouse) have made others uncomfortable. Because of the powerful elite nature of the members and the secrets they have kept for centuries has created many conspiracy theories against the freemasons. One in particular that really caught my eye was the idea that this group is actually a secret government within our government.

Some suggest that Freemasons established America to be a country of their own that they have secretly controlled since the American Revolution. There many “coincidental” occurrences that have had people wondering how true this may be. George Washington, our first president, was an avid Freemason. Above is a picture of George Washington at the laying of the cornerstone. He is all decked out in Freemason wear, an apron, their compass and ruler symbol, and a gavel. Since then one out of every three United States presidents have been members of the Freemasons. The gavel, used in our current judicial system is a major symbol of freemasonry, coincidence or not? 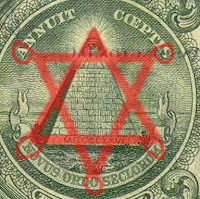 Also while researching I found a very mysterious Masonic connection on the dollar bill. As you can see if you circle the M A S O N and connect them with lines they create a seamless star of David, or pagan star (both common symbols of Freemason.) Also, as mentioned above, the creator of the UN and the CIA were both invented by a Mason. This may or may not be a coincidence but it sure has created some conspiracy theories that the Freemasons have been in control of the country, government and economy.

Any man can be a Freemason. He must ask to be one, Freemasons never ask you to join. They are a group based on moral systems and beliefs in God. All religions are welcome however one must have a religion. Some regard Freemasonry as a religion but they disregard that accusation. Even though the inside of their Grand Lodges look a lot like churches. Inside the lodge is an alter with a volume of sacred law and sacred books of whatever religion those masons believe in. Once you decide to become a Freemason it is a life altering commitment. It is an attempt to be reborn and become a new person, a Freemason; a good and moral person they emphasize. That sounds a lot like religion to me, or maybe it is just another coincidence.

There are three degrees of masonry; entered apprentice, fellow craft and master mason. At every level the mason will learn another secret pass code that will allow him to enter his next degree. However, this pass code must be kept secret just like everything else they learn. If you break your oaths as a Freemason you will be murdered (well at least there are historic records that support this).

This organization is based off and continues to grow off elaborate secrets.  It is hard to describe what exactly Freemasons are because a lot of it is speculative and pieced together from leaked secrets. We can however identify that the members of the largest single organization that is secret happens around the world and holds some of the most richest and most powerful men on earth. These people may or may not have dark agendas and have invisibly controlled and produced our current day society. So now when you see Freemason symbols on bumper stickers, flags, gravestones, t-shirts, buildings, etc you will know that there may be more to those images then the eye can see. It’s a society built off secrets non-masons may never know.

For more information, you can watch this documentary on the Secret History of the Freemasons

By supporting this blog, your donation will support our scholarship fund for participants in our nature-based programs.